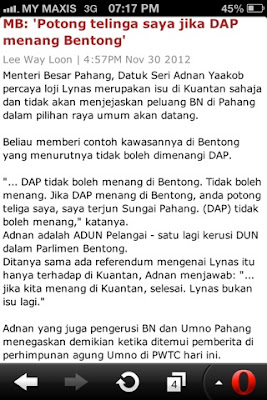 THE PIONEER in world of cyber journalism in Malaysia or even South East Asia is the Late MGG Pillai and his mailing list – discussion forum ‘Sang Kancil’, years before the likes of Malaysiakini and Malaysia-Today were even established. My respects for him and I consider him my Guru!

Before social media, journalists had very little tools to “listen” to the people – the audience. It was mostly through polls, emails, etc. Now, you have a slew of online communities that allow journalists to keep their hands on the pulse of what’s going on.

Social Media has also allowed the people to directly connect and humanize the journalists who were mostly kept behind the veiled publication without much control and influence (except for a PR person).

Now, it’s created a two way channel for the people and journalists to connect. While a lot of journalists and publications are moving in light speed to capture mind share, connect, and engage via tools such as Twitter, Facebook and Google+Hangout, the very core essence of journalism cannot be forgotten.

Journalists are entrusted by the public to tell the story in an objective manner with credible sources and provide information that is both educational and insightful. Journalists have a duty to the public to tell the story using various channels via blogs, etc. but ensure the story is credible, factual, and compelling. While Social Media may have changed the fundamentals of communication and delivery, the core foundation of journalism cannot be mistaken or forgotten
When one talks about social media, it’s a three level approach:

First – to disseminate information to relevant target audience at the right time, using the right channel.

Second – to engage target audience by relating and ‘connecting’ to them.

Third – to generate loyal ambassadors in a way that they represent you in the good sense among other target audience and answer on your behalf thus building a credible image.

The potential of social media to provide opportunities to ‘convert’ is huge but it requires strategising and extensive planning.

Anwar Ibrahim, has sure emerged as the star of Malaysian Politics through social media. With his blog, Facebook, Twitter and Google+ Hangout, he seems to have been in the news and has been the trending topic on most social media for awhile.

This seems to have given a sudden twist in the ability of social media to reach the right target audience. While Umno and Barisan National at one time mocked and even said that social media is for people who have got nothing better to do and have doubted the ability of Social Media to reach their target audience, today they play a different tune after Anwar Ibrahim has proved a point.

Najib Tun Razak is also trying hard with his Facebook, Twitter and his recent Goggle+hangout, but sad to say he is yet there.

This is the first time in Malaysian Politics that anybody has attempted to reach out to Malaysians on social media and we must say, what a campaign! The team behind Anwar Ibrahim’s campaign seems to have researched well and they have splurged content on all social media where it matters.

They are on Twitter, Facebook, G+, some of the top social networking sites and they are in touch with the right set of influencers in the online world to extensively talk about Anwar’s campaign in the digital medium.

The campaign is brilliant and they do the updating of information on the go and they ensure that they have researched the potential of all features of the top social networking sites and use it to their advantage. While most other political parties are harping on being first people to adopt social media, we are yet to see a campaign of this magnitude that effectively utilizes relevant features of social media.

So, has this campaign proved to be the best social media campaign in Malaysia? In some ways yes, this is the first campaign of its kind where there has been an effective utilization of digital medium in such a magnitude. The reach is significant and the design brilliant. However the effort is yet to spill over to the next levels – engagement. The campaign has just begun, but will it hold the audience glued?

The Facebook posts are great but the comments are yet to be monitored and catered to. There are several comments that need to be addressed, but it does not look like anybody cares. Facebook does provide the opportunity to convert people but Najib Tun Razak’s team is yet to use it fully to their benefit. Going by number of fans or number of people talking about the page as a metric to determine popularity, is now passé.

The number of people talking about the page could be phenomenal, but how many are talking positive and helping spread political awareness is the question, specially his 1Malaysia. But as Facebook users know all too well, a “fan” may not always be a fan and a “friend” may not always be a friend. And sometimes “likes” is just a five letter word.

Najib should remember, starting is 50% of work done. But will Najib’s team deliver the other half? Even though his has been a brilliant campaign with the help of APCO Worldwide, but there are signs of fading, unless of course there is constant innovation in reaching the target audience online.

What has happened so far is the mandate of his social media presence. His group has failed to cross the first level – appropriate presence. The second level of engagement is to ‘connect’ and cater to audience in real time, the magic to move towards conversion. This level is yet to be achieved in Najib’s campaign.

The politicians will be forced to take to social media and we might see a new breed of net savvy politicians who have the presence of mind to ‘connect’ in the real sense. The web 2.0 (now moving to 3.0) experience will force politicians to at least move towards what is right if not ‘do what is right’.

With mobile phones are already showing high penetration, politicians and government will ensure that there is internet connectivity at every corner in Malaysia so that they are able to at least present their messages if not ‘interact’.

Just because people respond to you through social media — by liking and friending and following you — that does not mean their virtual support will always translate into actual support, Rais Yatim!

“That was why (Anwar Ibrahim) was charged in court .. he interfered with police investigation”. – Tan Sri Musa Hassan, former Inspector-General of Police

A lot of people were taken aback by Musa Hassan’s comments on “interference” in on-going police investigation, as reported by The Malaysian Insider a few hours ago [Ex-IGP says ministers meddle with investigations]. Well, they shouldn’t, really. Musa had complained about “interference” in police work a week before he retired in September 2010 [IGP speaks out against third party intereference, The Star, 7/9/2010; see also KDN’s prompt response Home Ministry denies Musa’s “interference” claim, The Malaysian Insider, 8/9/2010]. What Musa said today isn’t new but what makes it news, I suppose, is the timing: right on the eve of the annual general assembly of Umno, the country’s ruling political party. Also, talk was rife about the ex-IGP being wooed by PAS, a major component of Anwar Ibrahim-led opposition pact Pakatan Rakyat. Could this be Musa’s opening gambit as an Opposition politician then?

I wasn’t taken aback at all by Musa’s remarks; in fact, I kind of expected it. Two nights ago, Musa and I happened to be having a quiet dinner in PJ. I had asked to see him because the talk about him and Anwar “sleeping together” was too much for me to bear … I had to ask him myself. Also, it had been quite a while.

We talked about many things and one of them was of how politicians tried to interfere when he was the CPO of Johor and when he was the IGP, and how things may be now with the current IGP. “They tried but they didn’t get pass me,” Musa said. I believe the man but others wanted Musa perceived as just another “yes” man (and corrupt, too, if RPK’s stories were to be believed!).

Take what Pakatan’s Khoo Kay Peng wrote in “Too Late, Too Little” after Musa had spoken out about “interference” two years ago:
“Musa is desperate to repair his image by pointing his finger at the Home Ministry. Predictably, he only voiced out his frustration and unhappiness after his contract was not renewed. If he gets another two years, Musa would have been more than happy to play along.”
So what of Musa Hassan’s latest claim, then – is he still trying to repair his image? Or is he rehearsing his lines as an election candidate for Pakatan come PRU13?

Most of us know the man as an Allah-fearing cop. At the dinner two nights ago, I observed that Musa had not changed much since he retired from the force. Still very passionate every time he spoke of how the police can do better. He didn’t seem to have aged, either: ramrod straight when he stands and never slouches when’s seated. So he needs to be less harsh and a little more diplomatic, perhaps, but, hey, if he had thought he had it in him he would have accepted the Government’s offer to be the country’s Ambassador to Brunei two years ago, wouldn’t he?

I asked him just now if he had started to be at loggerheads with certain politicians since our dinner. The way he was being quoted, people may think he was attacking the Home Minister again. No such thing, Musa assured me. A lot of politicians tried to interfere.

I had to ask him: Did Anwar Ibrahim try to interfere with police investigations back then?

As for joining Pakatan Rakyat, he told me “NO” and there is no reason to doubt the man. He has never been a member of any political party and he does not wish to be. “As police officer, I can’t be taking sides with any political parties.” What he wishes to do is to help improve the image of the police and strengthen the force. “This nation’s future depends on it.”